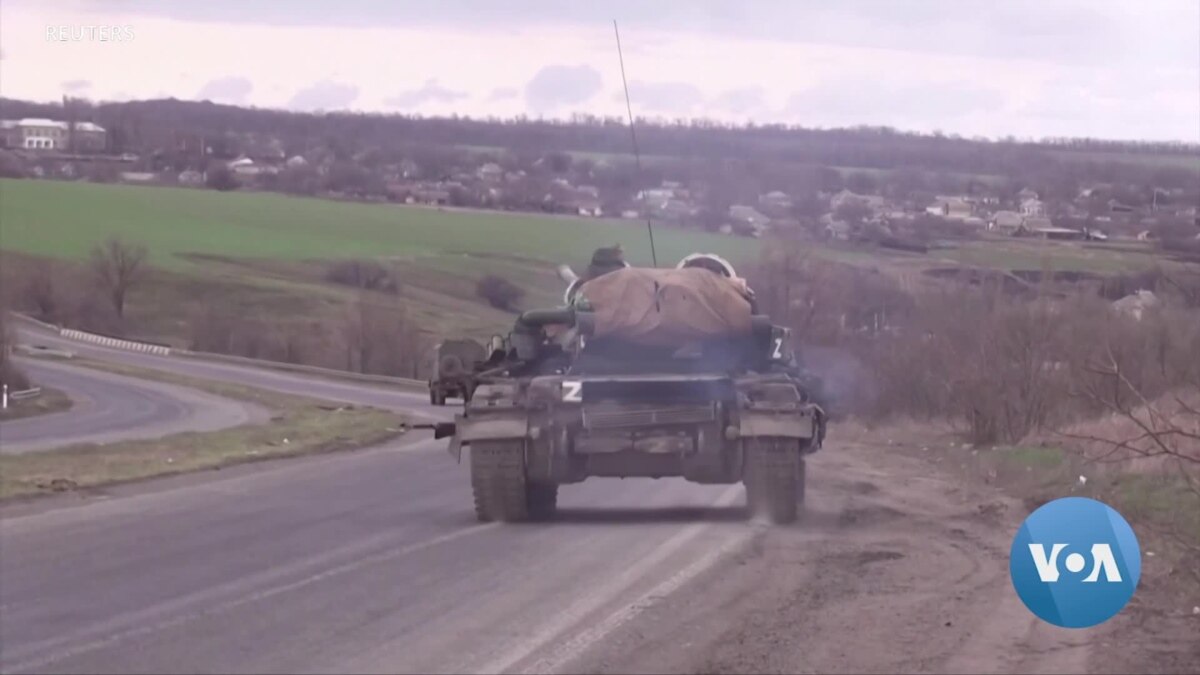 Ukrainian President Volodymyr Zelenskyy said “victory will be ours” Friday as the conflict with Russia entered its 100th day.

Zelenskyy appeared in a video filmed outside the presidential palace in Kyiv, flanked by the same officials who appeared in a similar video on the day of the invasion, February 24.

“Our team is much bigger. The Armed Forces of Ukraine are here. The most important — the people, the people of our state are here. Defending Ukraine for 100 days already. Victory will be ours,” he said.

Russian President Vladimir Putin delivers a video address announcing the start of the military operation in eastern Ukraine, in Moscow, in a still image taken from video footage released Feb. 24, 2022.

Russia began building up troops along the border in the fall of 2021 but repeatedly denied it planned to attack its neighbor. Then, on February 24, Russian President Vladimir Putin gave a televised address announcing what he called a “special military operation” in Ukraine.

“We will strive to de-militarize and de-Nazify Ukraine and will bring to justice those who committed multiple bloody crimes against civilians, including Russian citizens,” Putin said.

That night, explosions echoed across Kyiv. Russian tanks and armored vehicles began crossing the border. A sovereign European nation had been invaded, triggering the continent’s worst conflict since 1945.

U.S. President Joe Biden said it was a pre-meditated attack. “The Russian military has begun a brutal assault on the people of Ukraine, without provocation, without justification, without necessity,” Biden said.

Cars pass by destroyed Russian tanks in a recent battle against Ukrainians in the village of Dmytrivka, close to Kyiv, Ukraine, May 23, 2022.

By April, Russian forces were in retreat from the capital. They left behind scenes of horror. In towns like Bucha, advancing Ukrainian forces uncovered mass civilian graves and widespread evidence of torture and mass rape by Russian soldiers. Moscow claimed the evidence was fabricated.

French Foreign Minister Catherine Colonn, center, visits the site of a mass grave in the Ukrainian town of Bucha, near Kyiv on May 30, 2022.

Visiting the site of the mass graves in Bucha, Ukrainian President Zelenskyy said the world must take action. “These are war crimes and they will be recognized by the world as genocide,” he said.

The atrocities prompted NATO and Western countries to beef up their deployments in eastern Europe and increase weapons supplies to Ukraine. “We agreed that we must further strengthen and sustain our support to Ukraine so that Ukraine prevails in the face of Russia’s invasion,” NATO Secretary-General Jens Stoltenberg said April 7.

The United States has so far pledged $53 billion in military, economic and humanitarian aid.

Finland and Sweden – which for decades have remained neutral – applied to join NATO in the face of Russia’s aggression.

Meanwhile, the war prompted a huge exodus of Ukrainian refugees, with some six million fleeing to neighboring countries so far, and a further eight million internally displaced within Ukraine.

Russia is weaponizing refugees, says Afzal Ashraf, a professor of international affairs at Britain’s Loughborough University. “The shelling of civilian areas and driving out large amounts of civilian populations may well be part of the Russian plan, because that serves them well. It puts pressure, long term economic and political pressure, on Western governments,” Ashraf told AFP.

Western sanctions have tightened the economic noose on Russia, causing its currency to plummet. The U.S. banned imports of Russian energy. Europe – which is far more reliant on such imports – agreed to phase out Russian coal by the end of 2022 and ban most oil imports. However, European countries have so far failed to agree on a gas embargo and continue to pay hundreds of millions of dollars to Russia every day.

A rescuer walks among ruins of a school in Kharkiv, partially destroyed by a rocket on June 2, 2022 as Russian forces are solidifying their hold on the eastern Donbas region.

Facing mounting military losses, the Kremlin had redirected its forces to the eastern Donbas region by early May and began a new offensive to take the regions of Luhansk and Donetsk, which had been partly controlled by pro-Russian rebels since Moscow’s forceful annexation of Crimea in 2013.

The strategic port of Mariupol was all but destroyed. It fell to Russian forces in late May, after the last 2,000 Ukrainian soldiers sheltering in the giant Azovstal steelworks surrendered. Tens of thousands of civilians were killed in the city under indiscriminate Russian shelling and missile strikes.

Fighting continues to rage in the east and south of Ukraine. The governor of the Luhansk region said Friday that Russia now controls around 70 percent of the eastern city of Sievierodonetsk. Russian forces have been making steady gains across Donbas in recent days.

Ukrainian troops use U.S.-supplied M777 howitzer artillery in this photo tweeted by the Ukrainian defense ministry on May 13, 2022.

The U.S. is to begin sending long-range GPS-guided artillery systems to Ukraine, something Kyiv has long demanded, says Bradley Bowman of the Foundation for the Defense of Democracies in Washington.

“If you combine Ukrainian bravery and skill and a willingness to defend their homes against this unprovoked invasion with Western support, which frankly we’re going to have to be able to provide for the long haul, then I think over the long run this will be a grand strategic disaster for Putin. But in the short term, let’s be clear, the picture is mixed,” Bowman told VOA.

Ukrainians have retaken a strategic territory once controlled by Russian troops. Plus, one of the suspects charged in a deadly smuggling operation in Texas made his first court appearance. We’ll also the explain the demands and frustrations that have some Delta pilots protesting. The US stock market marked its worst first half of the year since 1970. Lastly, we’ll tell you what scientists discovered that may explain why more women get Alzheimer’s than men.