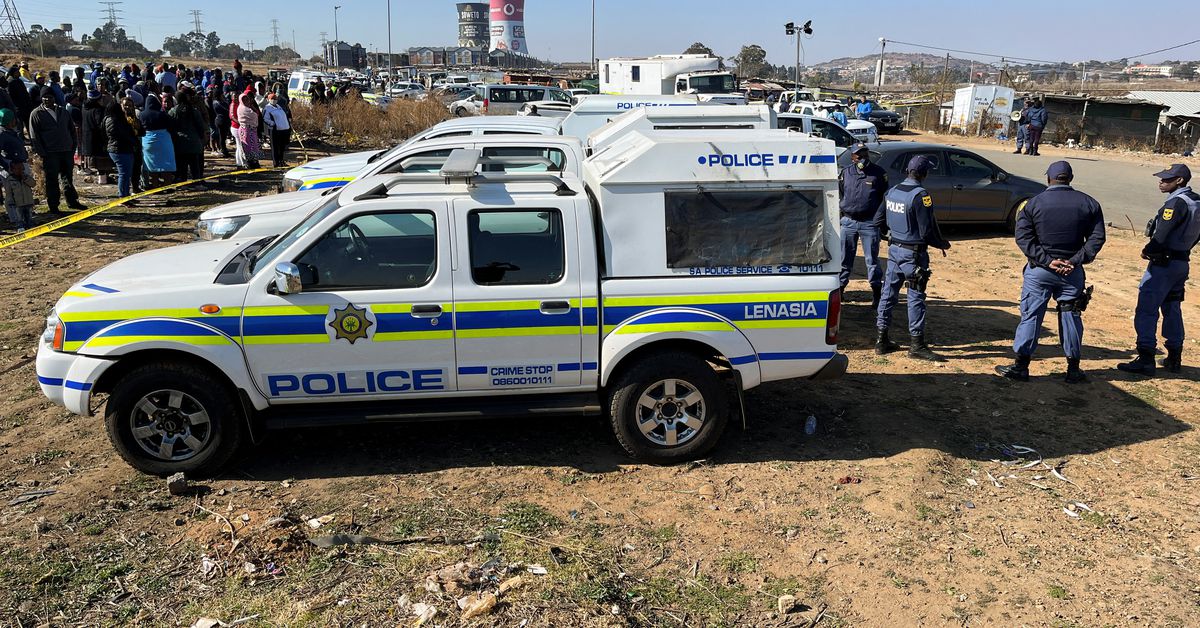 JOHANNESBURG, July 10 (Reuters) – Gunmen killed 19 people in two apparently random shootings within hours of each other at taverns in South Africa, police said on Sunday, reinforcing the country’s bleak status as a global centre for murder.

Attackers armed with rifles and pistols opened fire in the Orlando East bar in the township of Soweto in the early hours of Sunday, killing 15 people and wounding nine, police said.

“You can see by the way the bullet cartridges are cast around that they were just shooting randomly,” said Elias Mawela, police commissioner for Gauteng province.

Sololo Mjoli’s two sons, Sthembiso, 34, Luyanda, 18, and were both killed in the attack at the bar in one of Soweto’s poorer neighbourhoods, made up mostly of metal sheet shacks.

“I’m so heartbroken,” said the 59-year-old gardener, adding that Sthemibiso’s girlfriend had arrived on the scene shortly after the shooting to find him still breathing.

“Then he was rushed to hospital, where he died.”

Bar waiter Thobani Mhlabiso said he hid behind the fridge to survive the onslaught.

Police cordon off the scene where 15 people were killed by unknown gunmen inside a tavern, in Nomzamo, Soweto, Johannesburg, South Africa, July 10, 2022. REUTERS/Siyabonga Sishi

“There was blood everywhere,” he said.

Police confirmed a second apparently random shooting hours earlier, at around 8:30 p.m. on Saturday, in a tavern in Pietermaritzburg, 500 km southeast of Soweto, which saw four people killed and eight wounded.

Officers said they did not believe the two shootings were linked. The killers from both incidents are on the run, according to police, who said it was not clear how many attackers were involved in either shooting.

South Africa, home to about 60 million people, is one of the world’s most violent countries with 20,000 people murdered every year, one of the highest per-capita murder rates globally.

There are about 3 million guns registered in the country, according to campaign group Gun Free South Africa, though many more are thought to be circulating on the black market.

At the scene of the shooting in Soweto, on the outskirts of Johannesburg, crowds gathered around the police cordon while officers combed the area for clues – one carrying zip-locked bags full of spent bullet cartridges.

Soweto is the largest of the country’s Black townships. They were the creations of white minority rule, which ended in 1994 but whose legacy of widespread poverty, youth unemployment and violence persists nearly three decades later.

Gauteng police commissioner Mawela told Reuters that there had been a third shooting during a suspected robbery in a tavern in Katlehong, also outside Johannesburg, on Thursday night, which killed two people and wounded two others.