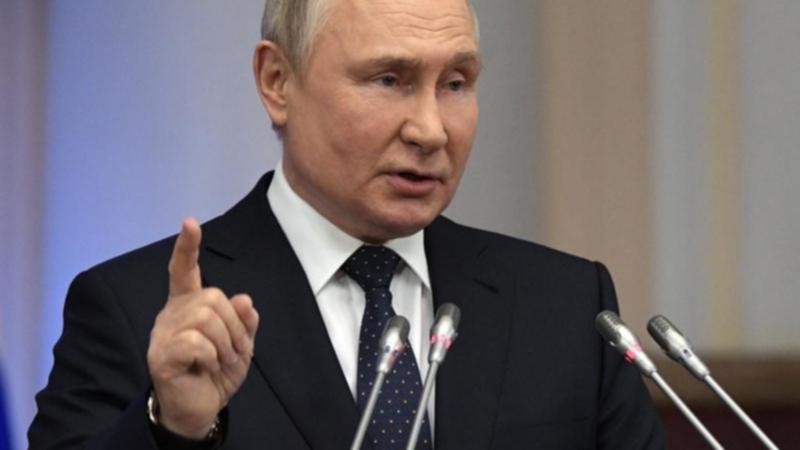 Watch the video above to see more on this story

When asked directly if Putin was unhealthy or unstable, Burns said: “There are lots of rumours about President Putin’s health and, as far as we can tell, he’s entirely too healthy.”

So what are we to make of speculation about Putin’s health? These rumours are nothing new.

His body language, speech and gait have all been relentlessly scrutinised.

And every time Putin disappears from public view for a few days – or even makes a slight misstep, such as he did recently after touching down in Tehran – it can set off a round of intense, tabloid-style speculation about his physical wellbeing.

That’s the nature of Putinism, a sort of postmodern dictatorship built around one man.

The Kremlin has worked hard to create an aura around Putin as the country’s sole problem-solver: He hosts an annual call-in show where he literally takes on the role of pothole-fixer-in-chief.

And over the course of two decades, he has consolidated power, building a system that is driven by the whims and fixations of one person (obvious case in point: the invasion of Ukraine).

So without a clear successor to Putin, Russia is always a few sneezes away from a full-blown political crisis.

The Kremlin routinely ridicules any speculation about Putin’s health; on Thursday, spokesman Dmitry Peskov said Putin felt “fine” and in “good health” before describing speculation to the contrary as “nothing but hoaxes”.

But Burns’ statement, even if made in jest, perhaps tells us a lot more about Western policymakers than it does about Putin’s fitness.

For starters, it reflects a strong element of wishful thinking when it comes to the Kremlin leader.

It suggests that the most worrying international crises might simply evaporate if one person – Putin – disappears from the world scene.

And that’s a potential misreading of Russia. To be sure, the decision to invade Ukraine came down to one person: Putin, who seems to be driven by his own warped reading of history and a dose of imperial ambition.

And Russia’s confrontation with the West has been driven for years by the personal grievances of a person who famously lamented the collapse of the Soviet Union.

But it is naive to hope that Putinism might not live on without Putin.

Nearly half a year after the invasion, Putin’s heavy battlefield losses have not sparked, say, widespread draft resistance.

The Russian population – with the exception of thousands who have been arrested in anti-war protests – has more or less passively accepted the economic pain of new sanctions imposed on their country.

Putin’s ratings, if the findings of state-run pollster WCIOM are to be believed, have actually gone up since the February 24 invasion.

The CIA director’s remarks, in context, reflect how challenging it is to understand Putin, someone whose decision-making processes are opaque to the outside world.

Burns noted Putin’s narrowing circle of trusted advisers. But during the pandemic, Putin’s isolation took on a very physical dimension, as seen in his meetings with some world leaders at an absurdly long table.

Putin’s extreme social distancing appears to reflect the lengths the Kremlin is willing to go to protect his physical health – and by extension, any information about his health.

Just before the invasion, French President Emmanuel Macron declined the Kremlin’s request for a Russian COVID test, the Elysee said, while refusing to comment on media reports that Macron did not want Russian doctors getting their hands on his DNA.

It’s fair to speculate that Putin’s entourage would go to similar lengths to avoid providing any clues about his health to any prying foreign intelligence service.

Analysing Russia often comes down to the study of one person.

But as Burns might recall, the consensus-driven policymaking of the late Soviet Politburo still managed to blunder into the disastrous Afghanistan war in 1979.

And, as many Ukrainians are quick to point out, Russians have yet to have a real reckoning with their Soviet imperial past.

Any hope of change is distant: If Burns is to be believed, and if history is any guide, Putin is likely to be around until he reaches peak Brezhnev.