Stability and prosperity in the Horn of Africa is critical for the subregion and for the world. Until quite recently, the Horn of Africa appeared to be on a positive trajectory in the context of strengthened regional relations, political transitions, and encouraging economic growth and poverty reduction trends. For example, a recent analysis has shown that the region’s economic growth in the recent past was higher than in the rest of sub-Saharan Africa—with Ethiopia achieving an average of over 6 percent GDP per capita growth between 2014 and 2019—and extreme poverty in Djibouti, Ethiopia, and Kenya falling from 40 percent in 2005 to 33 percent in 2015.

However, events over the last three years have posed a serious challenge to this progress, particularly in light of the outbreak of a major conflict and humanitarian crisis in Ethiopia, a military coup in Sudan, continued cross-border political tensions and security challenges—including violent extremist threats in Somalia and northeast Kenya—and compounding shocks such as climate change and COVID-19. The ongoing food crisis arising from successive droughts and the war in Ukraine is also rapidly threatening the Horn, with an estimated 55 million people currently facing food insecurity—a situation that will likely deteriorate in the coming months. Furthermore, countries across the Horn continue to feature high levels of vulnerability and marginalization, with an estimated 57 million people living in extreme poverty, according to World Bank estimates.

These crises are manifestations of the underlying causes of fragility in the Horn, which spill across borders, are diverse, multifaceted, and have their roots in complex historical legacies. First, these include issues relating to inter-communal contestation over resources—such as water, pasture, and land—and which are exacerbated by pressures such as climate change and rapid demographic growth. Second, regional fragility and conflict dynamics are driven by weak state legitimacy and fractured social contracts, particularly in marginalized borderlands that exhibit high levels of socioeconomic deprivation. And third, these dynamics are intensified by geopolitical contestation over control and access to strategic regional resources, such as fresh water, seaports, and mineral reserves. Ultimately, the region’s susceptibility to violent conflict, coupled with high levels of vulnerability and exclusion, as well as the impact of diverse shocks, threatens to push more people into extreme poverty and reverse development gains.

In light of these shared fragility challenges, a new development approach for the Horn is needed.  While country-level programs are important, regional platforms that help build the foundations for greater cooperation and economic integration are pivotal to build resilience and help communities adapt and cope with emerging shocks. In addition, approaches cannot “bypass fragility”—rather, they need to be squarely focused on addressing the root causes of fragility and conflict in order to unlock the region’s development potential. Finally, while diplomatic actors are key in addressing regional political or security related challenges, there is a need to link these efforts with development initiatives through a new approach of “development diplomacy”—a process in which development assistance focused on priority investments and policy harmonization combines with high-level political engagement to incentivize and sustain cooperation to tackle shared regional challenges.

The Horn of Africa Initiative: Development diplomacy in action

In this context, forums for regional dialogue and development cooperation, such as the Horn of Africa Initiative, are essential. Launched in 2019 by ministers of finance from across the region, the initiative aims to promote concerted action to face common development challenges which are hampering economic growth and poverty eradication efforts. Since then, the initiative’s members—Djibouti, Ethiopia, Kenya, Somalia, South Sudan (who has recently joined), and Sudan (whose membership has been paused since the coup)—with the support of the World Bank, the African Development Bank, and the European Union, have significantly scaled-up resources for regional projects that aim to improve shared development outcomes, strengthen resilience against shocks, and directly tackle some of the root causes of fragility. To date, over $7 billion in financing has been mobilized for priority regional projects, with an added focus on promoting necessary policy reforms and ensuring country- and regional-level ownership of implementation.

A key example of how the initiative is tackling fragility is through the focus on spatially targeting investments to support areas most impacted by conflict, such as neglected borderlands. For instance, a $750 million project has helped to strengthen infrastructure, boost access to services, and connect markets in the fragile and underserved areas of northeastern Kenya.

The initiative has also sought to strengthen regional resilience to climatic and other emerging shocks that can exacerbate localized conflict and intensify poverty. A concrete example is through a recent $385 million program that will help the region—and particularly communities across borders that often compete over scarce water resources—tap into shared groundwater aquifers. In addition, a $327.5 million project will help pastoralists across the region to mitigate the impacts of drought through innovative insurance products and better connect them to markets. Finally, the initiative aims to provide longer-term development support that can support livelihoods and complement essential humanitarian assistance. To this end, $2.3 billion has been mobilized to address the concerning levels of food insecurity across eastern and southern Africa, and which will particularly target assistance for the Horn.

Ultimately, the value of the Horn of Africa Initiative lies in its unique role of combining the scaled-up financing, policy dialogue on harmonization, and political-level engagement across countries—three key elements of development diplomacy—needed to build trust and strengthen cooperation among countries in the region. Only through such a comprehensive approach can the region address the underlying grievances and socioeconomic disparities that contribute to its instability and outbreaks of violence.

The challenges faced in the Horn of Africa will not be addressed through development assistance alone. Critically, they require coordinated action by political, security, and humanitarian actors, as well as regional institutions such as the African Union and the Intergovernmental Authority on Development. However, as demonstrated by the Horn of Africa Initiative, development does play a central role to complement these efforts and can offer an entry point to continue dialogue during periods of heightened tensions and deepen cooperation in strategic sectors.

Looking ahead, development actors must continue to adapt and strengthen their engagement to maximize development impact and address fragility challenges across the region. To this end, partnerships should also be deepened with civil society organizations, particularly those with on-the-ground presence across the region that can operate in hard-to-reach areas, build community buy-in for development programs, and support local peacebuilding initiatives.

It is also important to proactively address incipient risks and grievances—such as those regarding access to services or resources, or related to significant socioeconomic disparities—before they turn into full-blown crises that can spill across borders. A key area to be explored includes regional development projects to address low human-capital outcomes, building on successful examples in other regions, such as the Sahel Women’s Empowerment and Demographic Dividend Project.

Finally, it is critical to remain engaged over the long term, despite setbacks and the recurrence of violence. Addressing the complex and deep-rooted drivers of fragility and conflict is a long-term endeavor in which progress will not be linear. It is therefore imperative for development actors, in full partnership with the countries of the region and stakeholders from across the international community, to remain engaged and help the region fulfill its potential of a more stable, peaceful, and prosperous future. 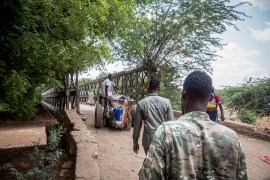