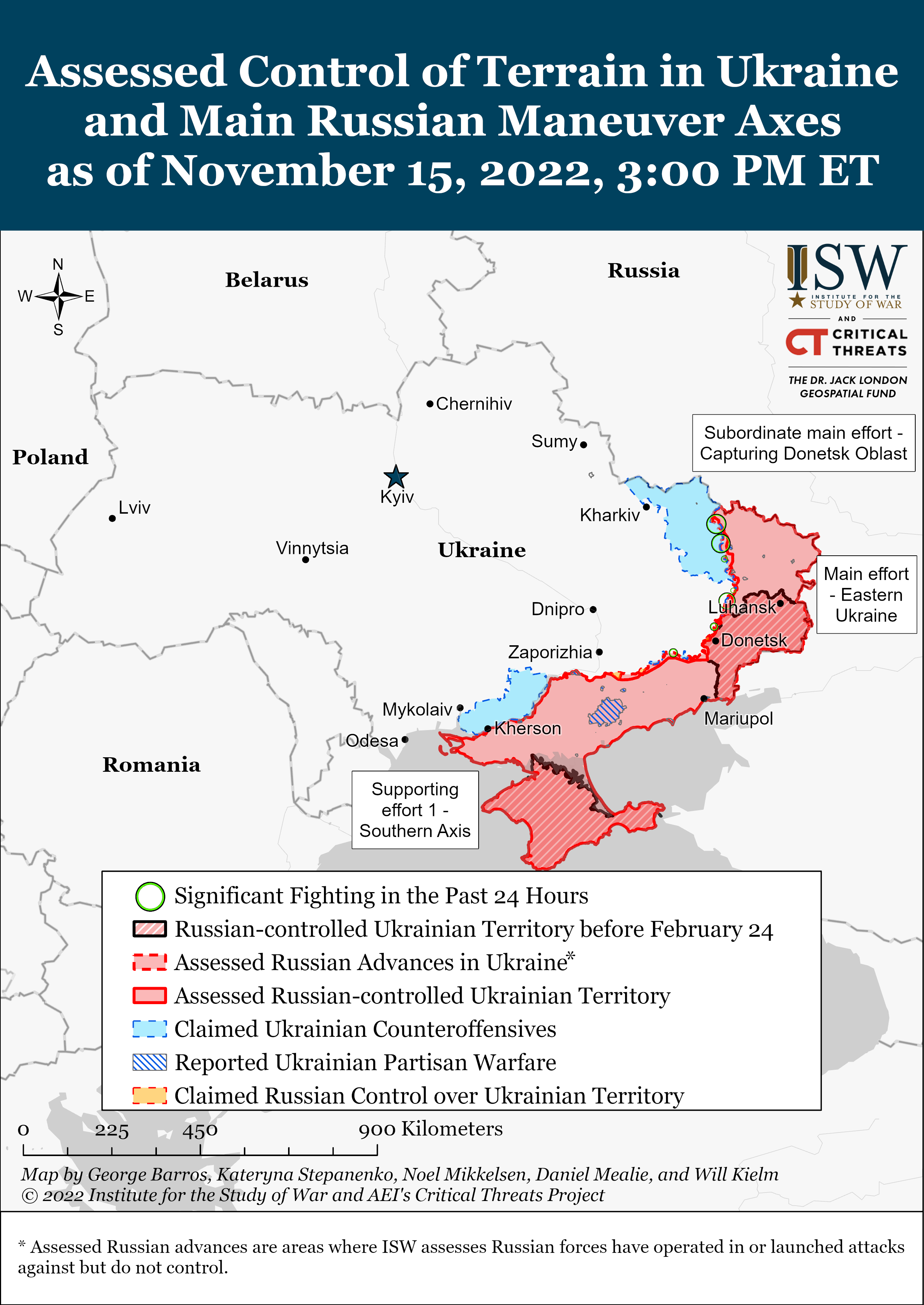 The Russian military likely used a substantial portion of its remaining high-precision weapon systems in the coordinated missile strikes on November 15. The Ukrainian General Staff reported that Ukrainian air defenses shot down 73 Russian cruise missiles and all drones on November 15.[4] Ukrainian air defenses had previously shot down 43 cruise missiles out of 84 and 13 drones out of 24 during the October 10 coordinated Russian missile strikes.[5] Ukraine‘s increased shoot-down percentage illustrates the improvement in Ukrainian air defenses in the last month, and the Ukrainian General Staff attributed this improvement to the effectiveness of Western-provided air defense systems. ISW also assesses that Russian forces are greatly depleting their stock of high-precision weapons systems and will likely have to slow the pace of their campaign against critical Ukrainian infrastructure.[6] Russian missile strikes continue to pose a threat to the Ukrainian civilian population with Ukrainian Deputy Head of the Presidential Office Kyrylo Tymoshenko stating that the energy situation is rather “critical” in Ukraine.[7] Damage to Ukraine’s energy infrastructure is unlikely to break Ukrainians’ spirit, however, given Ukraine’s improving air defenses and recent ground victories in Kherson Oblast.

Polish officials announced that a likely “Russian-made missile” landed in Poland within six kilometers of the international border with Ukraine. Western officials have yet to make definitive statements regarding the incident. The Polish Foreign Ministry stated on November 15 that a “Russian-made missile” killed two Polish citizens in the border village of Przewodow.[8] Polish President Andrzej Duda noted that Poland does not currently have information regarding the actor responsible for firing the missile but noted that the missile was “most probably Russian-made.”[9] The Russian Ministry of Defense (MoD) denied Russia’s involvement in striking any targets near the Ukraine-Polish border and claimed that the incident is a “provocation.”[10] Russian forces, however, did target energy infrastructure in Lviv City, about 72km south of Przewodow.[11] US President Joe Biden stated that according to preliminary information it is unlikely that the missile was fired from territorial Russia but emphasized that the investigation is still ongoing as of the time of this publication.[12] Ukrainian President Volodymyr Zelensky accused Russia of staging a “serious provocation” on NATO territory.[13] ISW will continue to monitor the situation.

The Kremlin had prepared today’s massive missile campaign before Ukrainian President Volodymyr Zelenskyy presented his 10-point peace proposal at the G20 summit on November 15. Zelensky reiterated that Ukraine will negotiate with Russia if the Kremlin totally withdraws its forces from Ukraine, restores Ukraine’s territorial integrity, and ensures punishment for war crimes among other provisions on nuclear, energy, and food security.[14] The Kremlin likely deliberately planned a massive missile strike campaign on Ukraine in anticipation of Zelensky’s speech at the G20 summit given that a multi-direction missile campaign requires significant military preparation. The Russian pro-war community on Telegram claimed that the Kremlin retaliated for Zelensky’s “Russophobic” statements shortly after his speech, but the impossibility of launching such a massive attack on short notice highlights the Kremlin’s disinterest in setting the stage for negotiations with Ukraine.[15]

The Kremlin’s official narrative surrounding the G20 summit further confirms Russia’s disinterest in the prospect of peace negotiations with Ukraine. Russian President Vladimir Putin did not appear at the summit and instead signed numerous decrees granting honorary titles to Russian-occupied Ukrainian cities.[16]  Putin’s Spokesperson Dmitry Peskov and Russia’s Foreign Minister Sergey Lavrov said that Russia will continue its “special military operation” in Ukraine, accusing Zelensky of unwillingness to negotiate with Russia.[17] Lavrov called Ukraine’s conditions “unrealistic and inadequate,” which has been the Kremlin’s recurrent position throughout the war.[18] Peskov also made a point to emphasize that Russia will still treat liberated Kherson City as the capital of Russian-occupied Kherson Oblast, and Secretary of Russia’s Security Council Nikolai Patrushev repeated the original false narratives used to justify the invasion that Russia needs to defend Donbas and that Ukrainian “Nazis” failed to comply with the Minsk agreements.[19]

Russian military commanders reportedly ignored existing plans for offensive operations in the Vuhledar direction and committed poorly trained reinforcements to costly assaults on Pavlivka out of impatience. Donetsk People’s Republic (DNR) military commander Aleksandr Khodakovsky claimed on November 15 that Russian forces initially planned to attack in the Vuhledar area from two directions but that he and other commanders realized that the poor training of reinforcements and their inability to contact brigade commanders made such plans impossible.[20] Khodakovsky claimed that brigade commanders changed the plan completely and committed all Russian forces in the area to an attack on Pavlivka, Donetsk Oblast.[21] ISW had previously reported that Russian forces prematurely impaled an insufficient concentration of mobilized personnel on offensive pushes aimed at seizing Pavlivka leading to extensive losses, particularly among the 155th Naval Infantry Brigade of the Pacific Fleet.[22]  Russian military officials likely abandoned their initial plans and committed poorly trained reinforcements to the assault on Pavlivka due to a sense of politically-driven urgency to restart the Donetsk offensive campaign before the planned Russian withdrawal from Kherson City.

Russians are increasingly turning to various platforms on social media to express their dissatisfaction with mobilization problems, a phenomenon that has the ingredients to ignite organized online-based movements in Russia. Sixteen anti-war groups in Russia launched a petition demanding that Russian President Vladimir Putin demobilize all mobilized Russian men.[26] The petition has already garnered almost 38,000 signatories as of the time of this publication. About 1,500 mothers of disabled children and mothers with more than three children in their households also petitioned Putin to exempt their husbands from mobilization.[27] Russian opposition and non-governmental organizations such as Soldiers’ Mothers of St. Petersburg had voiced concerns with the Russian Armed Forces prior to the start of the Russian full-scale invasion of Ukraine but did not receive significant attention within the Russian information space.[28] Grievances over mobilization issues, however, reached the milblogger community that was already critical of the Russian Ministry of Defense and that has been discussing issues with the execution of mobilization since the second day of the order.[29] These grievances are increasingly influencing both the opposition and the pro-war communities, which is a new phenomenon. While Russian police have consistently suppressed small-scale protests throughout the country the Kremlin has yet to regulate platforms such as Telegram that allow Russians across the country to share their discontent and demand action from local officials with the backing of prominent milbloggers.

Russian officials continued to set conditions to force the International Atomic Energy Agency (IAEA) to recognize Russian control over the Zaporizhzhia Nuclear Power Plant (ZNPP) and thereby de facto recognize the Russian annexation of occupied Ukraine. The IAEA announced on November 14 that Russian ZNPP authorities rejected a Ukrainian proposal to bring two reactors to a low power state from a hot shutdown state and that Russian officials are increasingly making “significant operational decisions,” noting that IAEA Director General Rafael Grossi expressed concern at “open contradictions” in decision making at the ZNPP.[30] The IAEA and Ukraine’s Resistance Center reported that Russia is increasingly importing technical staff from Russian nuclear power plants to the ZNPP.[31] The IAEA’s reporting and concerns about the decision-making hierarchy at the ZNPP is an inflection in the IAEA’s usual communications and suggests that Russian physical control and operational authority over the plant is increasing to a point that is alarming the IAEA.