Former high school teacher Ailia was devastated when her 85-year-old father died after displaying COVID-like symptoms as the virus swept through their hometown in the southeastern province of Jiangxi.

While her father was never tested, Ailia and her mother were both confirmed positive around the same time and she believes that COVID was a cause in his death.

As hundreds of millions of Chinese travel to reunite with families for the Lunar New Year holiday starting Jan. 21, many will do so after mourning relatives who died in the COVID-19 wave that has raged across the world’s largest population.

For many, bereavement is mixed with anger over what they say was a lack of preparation to protect the elderly before China suddenly abandoned its “zero-COVID” policy in December 2022 after three years of testing, travel restrictions and lockdowns.

Ailia, 56, said that she, like countless Chinese, had supported reopening the economy. Her father died in late December, weeks after China dropped its COVID restrictions.

“We wanted things to open up, but not to open up like this – not at the expense of so many elderly people, which has a huge impact on every family,” she said by phone.

On Saturday, China announced that there had been nearly 60,000 COVID-related hospital deaths since the end of “zero-COVID” – a 10-fold increase from previous figures – but many international experts say that is an undercount, in part because it excludes people who died at home, like Ailia’s father.

Among those fatalities, 90% were 65 or older and the average age was 80.3 years, a Chinese official said on Saturday.

Many experts have said China failed to take advantage of keeping COVID-19 largely at bay for three years to better prepare its population for reopening, especially its hundreds of millions of elderly – criticism that China rejects.

A Chinese official said on Jan. 6 that more than 90% of people above aged 60 had been vaccinated, but the share of those over age 80 who had received booster shots was only 40% as of Nov. 28, the most recent date for which that data was available.

“If only they used the resources used for controlling the virus for protecting the elderly,” said Ailia, who like many people interviewed declined to use their full name given the sensitivity of criticising China’s government.

Chinese officials have repeatedly cited the importance of protecting the elderly, announcing various measures, from vaccination drives to setting up a task force in Shanghai, China’s biggest city, to identify high-risk groups.

Beijing’s decision to end “zero-COVID” came after rare widespread street protests against the policy in late November, but public complaint over China’s handling of the end of COVID curbs has largely been via heavily censored social media.

Several analysts said China’s handling of COVID had eroded confidence in the government, especially among upper-middle class urbanites, but they did not see it as a threat to the rule of President Xi Jinping or the Communist Party.

Lila Hong, 33, who works in marketing for a carmaker, was in Wuhan at the start of the pandemic there three years ago. While her family made it through that harrowing initial period when little was known about the coronavirus, last month she lost two grandparents and a great-uncle after they caught COVID-19.

Hong recalls visiting with her father to a crowded Wuhan crematorium to collect the ashes of her grandparents – a grim but common experience during China’s COVID surge.

“It should have been a very solemn and respectful situation. You imagine it like that, but in fact it felt like queuing up in the hospital,” she said.

“I’m not saying reopening is not good,” said Hong. “I just think they should have given more time for preparatory work.”

A Beijing resident surnamed Zhang, 66, said he had lost four people close to him to the virus since early December including his aunt, 88, who was infected while in hospital.

Like others, he said he felt the aftermath of her death was chaotic, rushed and not keeping with tradition.

“People haven’t had the opportunity to say farewell to their loved ones. If we cannot live a decent life, we should at least be able to have a decent death,” he said.

Of seven grieving relatives Reuters spoke to for this article, all but one said COVID was left off the death certificates of their loved ones, even though they believe it was a key trigger for their deaths.

Philip, a 22-year-old student from Hebei province, which surrounds Beijing, supported November’s anti-lockdown protests but feels let down by how the reopening has been managed and blames the government.

“It seems like they have all the power in the world and yet they did not do this well. If it was a CEO of a company I think he would have to resign,” said Philip, who lost his 78-year-old grandfather on Dec. 30.

“The hospital didn’t have any effective medicine,” he recalled. “It was very crowded and there weren’t enough beds.”

After his grandfather died, his body was removed from the bed, quickly replaced by another patient.

“The nurses and doctors were so busy. They seemed to be constantly writing death certificates and giving copies to relatives. There were so many deaths … it’s a huge tragedy.” 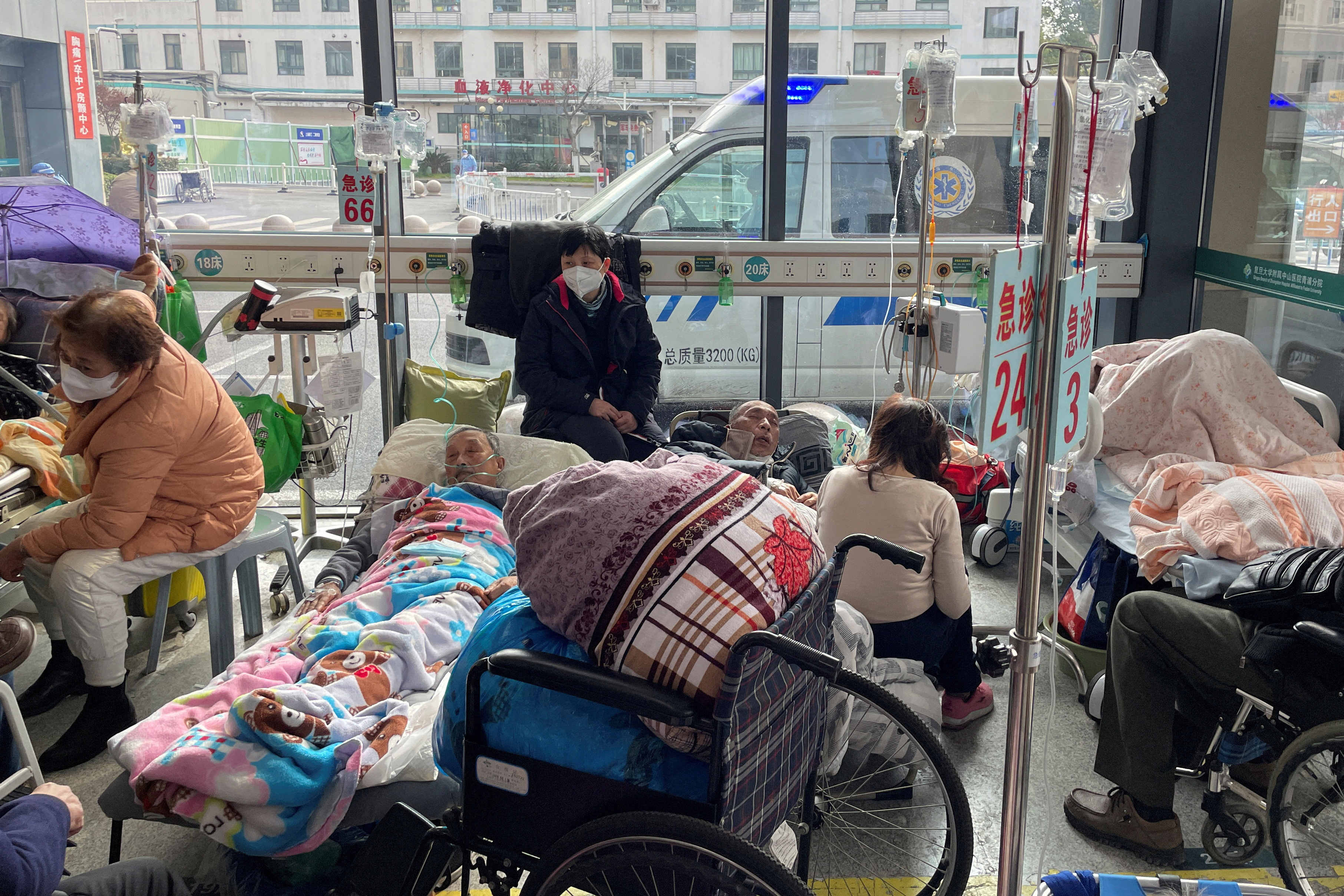 Patients lie on beds in the emergency department of a hospital, amid the coronavirus disease (COVID-19) outbreak in Shanghai, China, January 5, 2023. REUTERS/Staff 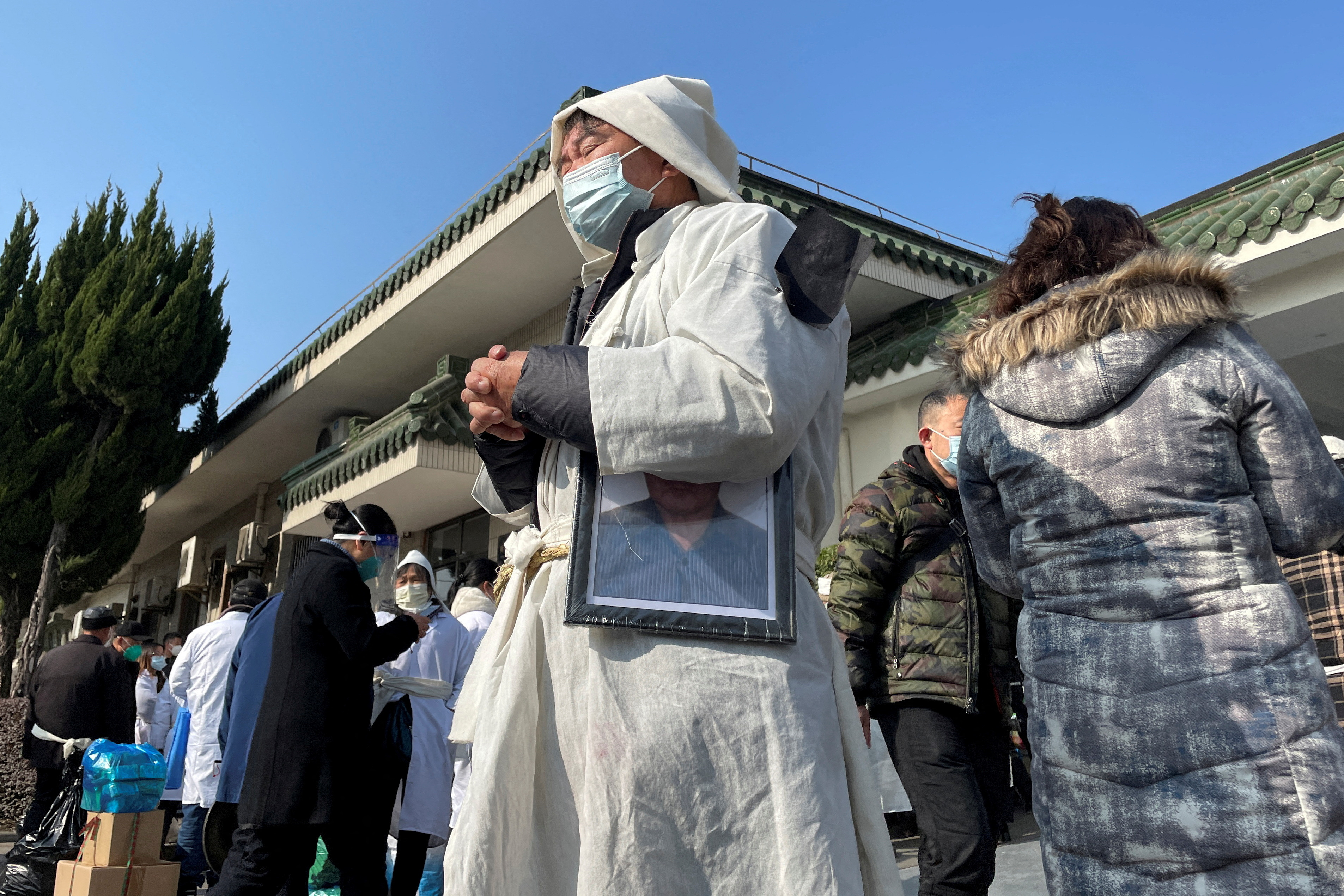 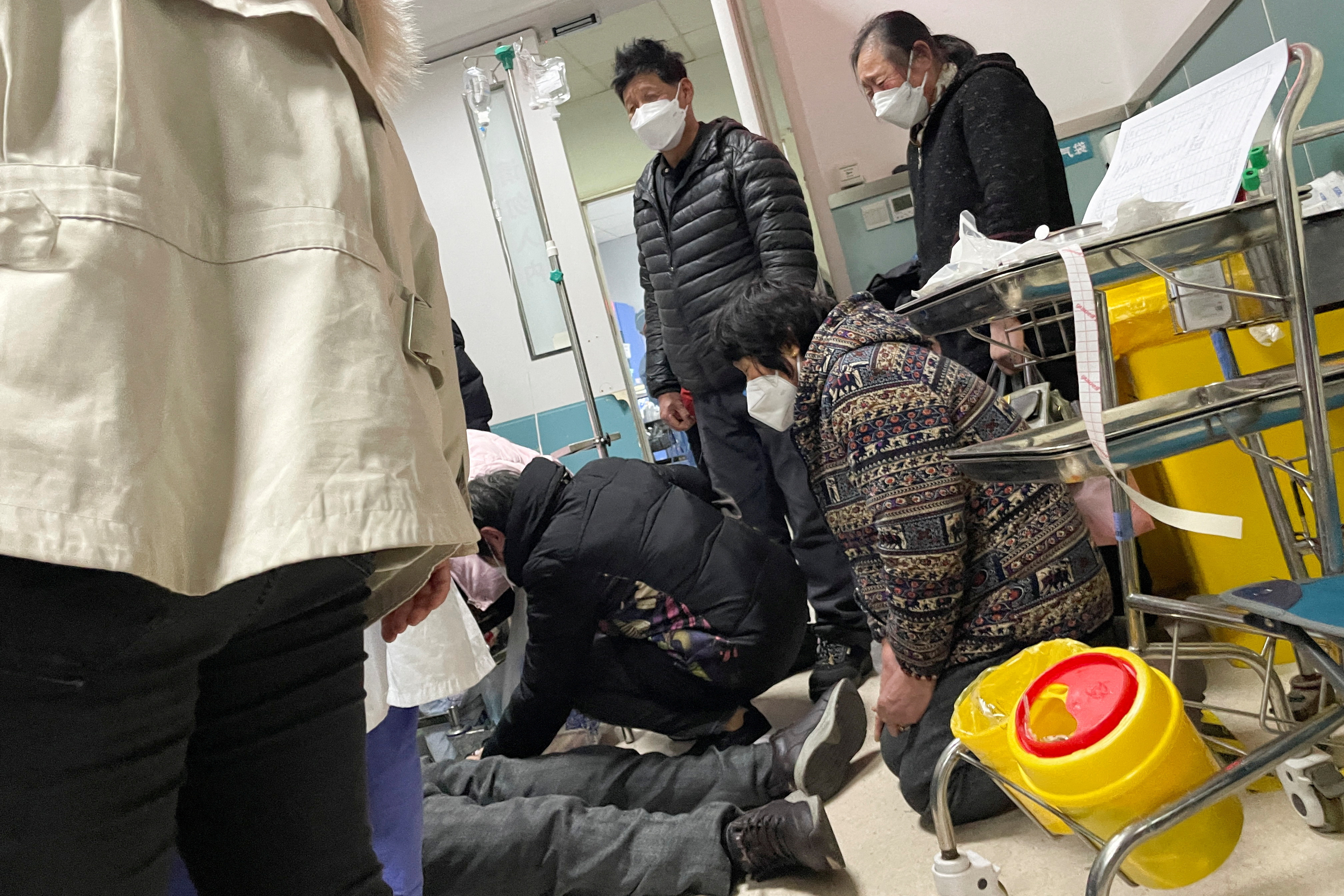 Relatives react next to a man receiving chest compressions through a CPR device while lying on the floor in the emergency department of a hospital, amid the coronavirus disease (COVID-19) outbreak in Shanghai, China, January 5, 2023. REUTERS/Staff