On Thursday in Paris, trains were at a standstill. Schools were empty. The Eiffel Tower was closed to visitors.

But at the Place de Republique, over 80,000 protesters filled the streets holding signs with messages like “don’t touch my retirement!”

The “Black Thursday” strikes were organized by several prominent trade unions in France in opposition to President Emmanuel Macron’s plan to overhaul the pension program. Railways, schools, and refineries were amongst the industries that saw workers walk out in protest, calling the decision a “historic regression.”

“In France, those who are currently working pay into the fund that those in retirement are paid from,” explains Andreas Bieler, a Professor of Political Economy at University of Nottingham who focuses on labor movements. ”Because there is a change in population [and] there are more older people in retirement and fewer younger workers who actually pay, there are concerns about sustainability.” 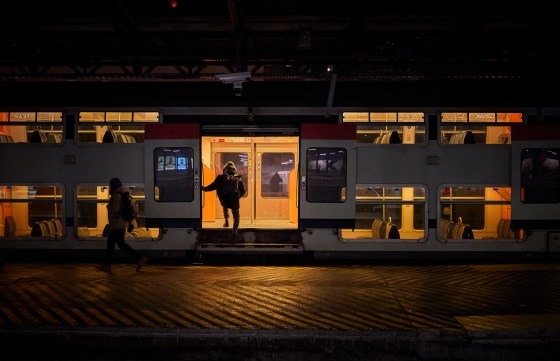 Then and now, changes to the program were not met warmly. In 2019, when the government presented a points-based system that would allow a person to retire once they had gained a certain number of points, thousands of protesters took the streets across France in what was one of the longest demonstrations in France’s history. The government was forced to drop the measures amid the coronavirus pandemic.

The new plan is more straightforward, increasing funds by making the French work longer. A recent public opinion poll found that over 60% of French people oppose the plans, which has united France’s left and far-right groups in their opposition.

The planned reforms would yield an additional 17.7 billion euros ($19.1 billion) in annual pension contributions, allowing the system to break even by 2027, according to Labour Ministry estimates. The unions have called for other ways to increase funds, like taxing the ultra-rich or increasing employer payroll contributions, Reuters reported.

“When there’s a strike, they better focus on what the citizens taking action have to say,” said Phillippe Martinez, the Secretary General of the CNT trade union. “It’s rare in France to see all the trade unions agreeing on something, so it demonstrates the seriousness of the problem to those leading the country.”

The protests drew out a million people and extended across major French cities, including Marseille, Toulouse, Nantes and Nice and come as a cost of living crisis continues to squeeze out workers worldwide. 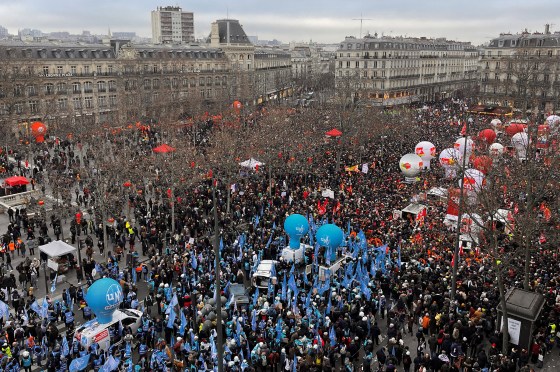 Last year, workers across France demonstrated to protest rising inflation and demand salary increases. The U.K. has seen a number of strikes across the NHS, rail services, and universities, with the country’s rail minister, Huw Merriman, confirming that the government lost more money due to the impact of rail strikes than it would have cost to settle the disputes months ago.

With the war in Ukraine continuing to impact energy prices and inflation on the rise worldwide, Bieler says that these movements are more likely to pick up steam. “All of this is happening against the background of a cost of living crisis,” says Bieler. “We have increasing levels of inflation, we haven’t seen since the 70s and of course, we’ve just come out of a pandemic which has already put downward pressure on wages and people’s income and savings.”

“Workers are being squeezed.” says Bieler, who notes that wage increases are not matching the ballooning inflation. “A lot of people are in really emergency situations.”

Macron plans to proceed with the changes despite protests. AP reported that, during a news conference at a French-Spanish summit in Barcelona, Spain, Macron said that “we must do that reform” to “save” the pension system.

“We will do it with respect, in a spirit of dialogue but also determination and responsibility,” he added. The change is expected to be debated in Parliament next month, where Macron no longer has an absolute majority.

Bieler notes that protests haven’t always been enough to move the needle against pension reforms in the past. Millions took the street in protest when Conservative president Nicolas Sarkozy moved the retirement age to 62 from 60 in 2010, but the action did not prevent the reform from going through.

“In the end, I think there always have to be compromises and some reform is going to take place,” says Bieler.

But the French unions aren’t backing down yet, calling for another strike on Jan. 31st.

“The government must give up,” the unions said in a statement, according to Bloomberg News. “This reform is unacceptable and goes against the interests of the population. Workers want to retire in good health.”